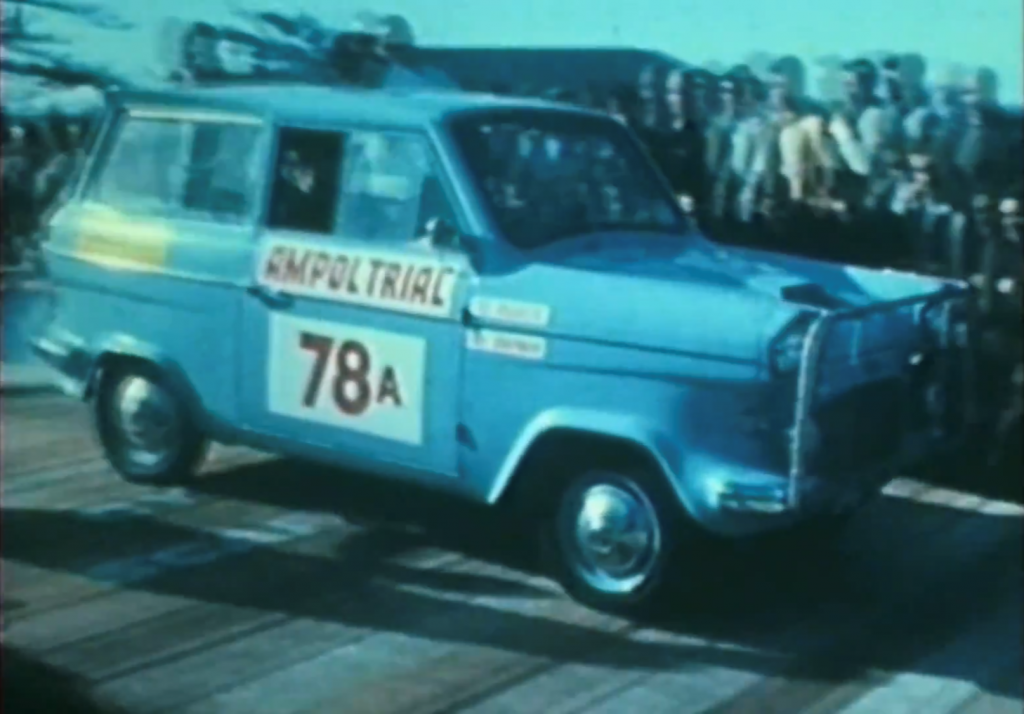 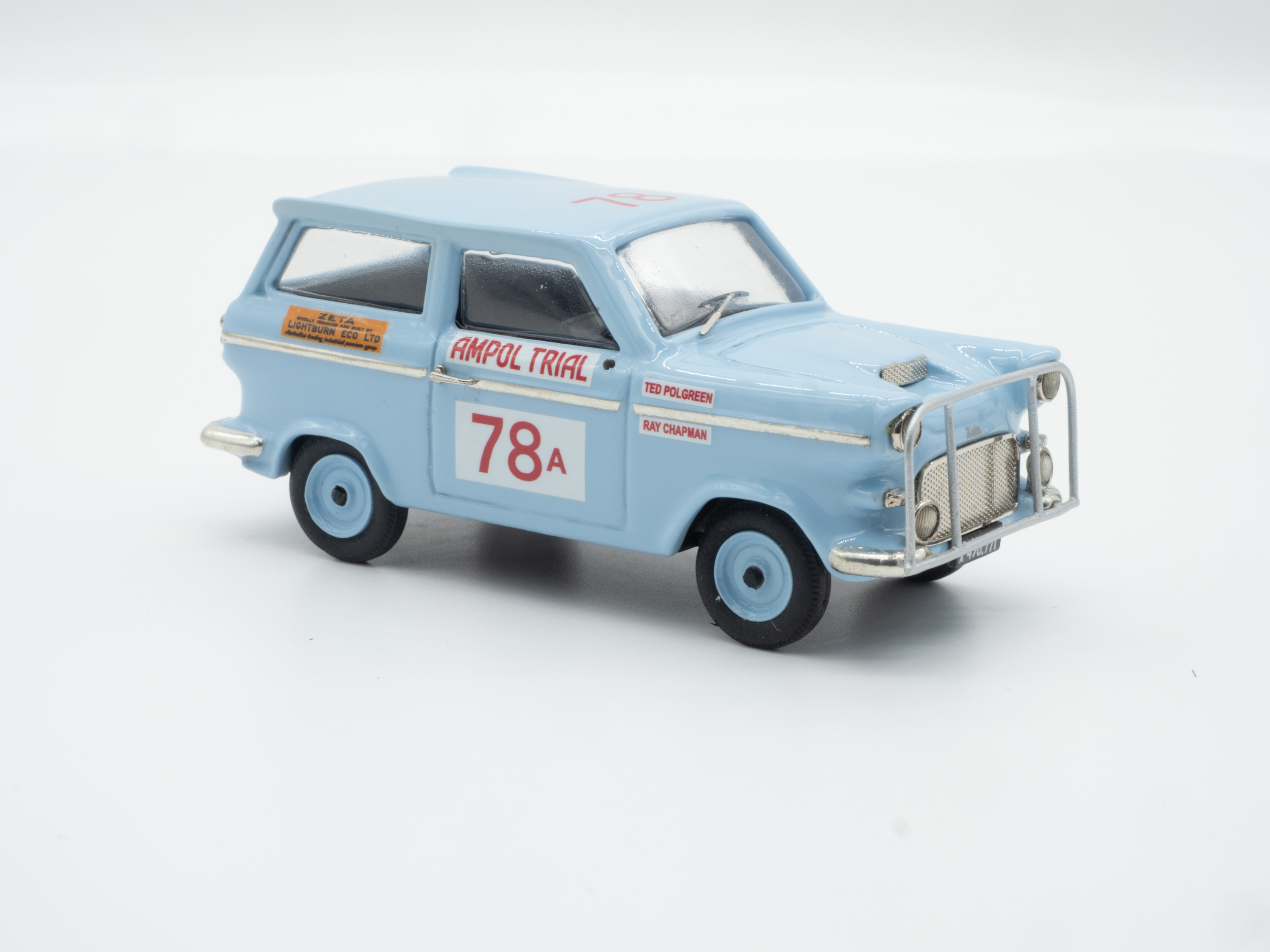 On 14 June 1964, three Lightburn Zeta Runabouts started a courageous durability race in the Ampol Around Australia Trial with another 144 cars. An endurance race of 7000 miles (11 260 km) traversing 4 States and 1 Territory over 14 days. Starting and finishing at Bondi Beach, NSW and racing to Brisbane, Rockhampton, Bourke, Adelaide, along the Great Ocean Road, Melbourne, through the Snowy Mountains and back to Sydney.

Famous land speed record racer Sir Donald Campbell attended the start to wish the Zetas and their drivers well. He admired the Lightburn marque after using a fleet of Zeta Runabouts at Lake Eyre, SA while preparing for his recent land speed record attempt.

Ted Polgreen, a South Australian speedway driver and Ray Chapman a Development Engineer who worked on the Zeta project, was the successful crew of Zeta 78A.

Zeta 79A had Bill Nair as its chief driver and the only member of the Zeta Team with around Australia rally experience, while the Zeta 82A crew of Ian Rodgers and Rick Sealey were both 19 years old and inexperienced. The odds were stacked against Team Zeta, but their chances were bolstered by their enthusiasm, determination and the robust Lightburn Zeta microcar.

The first check was Lithgow, NSW, 70 miles from Sydney, to be completed in a set time of 3 hours and 13 minutes. The trial of endurance had begun tracing a circuitous route coursing through towns, dozens of dry creek crossings, wide rivers, water in places over the road to 2 feet deep (600 mm), in other places snow, jagged rock roads, narrow highways with treacherous gravel shoulders, slippery graded dusty dirt roads, furrowed or corrugated and rough bush tracks with obstacles or fallen trees, wandering emu and indecisive kangaroos.

To add to the degrees of difficulty other special sections were subject to strict speed and time trials with penalty points deducted for transgressions. Early each day and at night before rest, the team poured over the Zetas to keep them fit for purpose and race hardy.

The front wheel drive Zetas with their 900 lb. (408.23 kg) lightness, provided by a steel base, fiberglass body, and efficient braking, added to their agility. The car was tested in other trials and reached 73 m.p.h. (117.48 km/h), 13 m.p.h. (20.92 km/h) over the manufacturers recommended maximum speed. Zeta 79A was tested extensively for 3 days in the Mount Kosciusko area in the snow after the Ampol Trial and proved stable on all surfaces.

One of the longest stretches of the Ampol Trial was 1065 miles (1704 km) from Lismore, NSW to Marlborough, QLD. By this time the determined Zetas were officially only represented by the remaining indefatigable Zeta 78A. Many incredulous followers were amazed at the Zeta’s resilience.

On 28 June 1964, the race concluded back at Bondi Beach. The winners were Harry Firth and Graham Hoinville, driving a Ford Cortina GT. 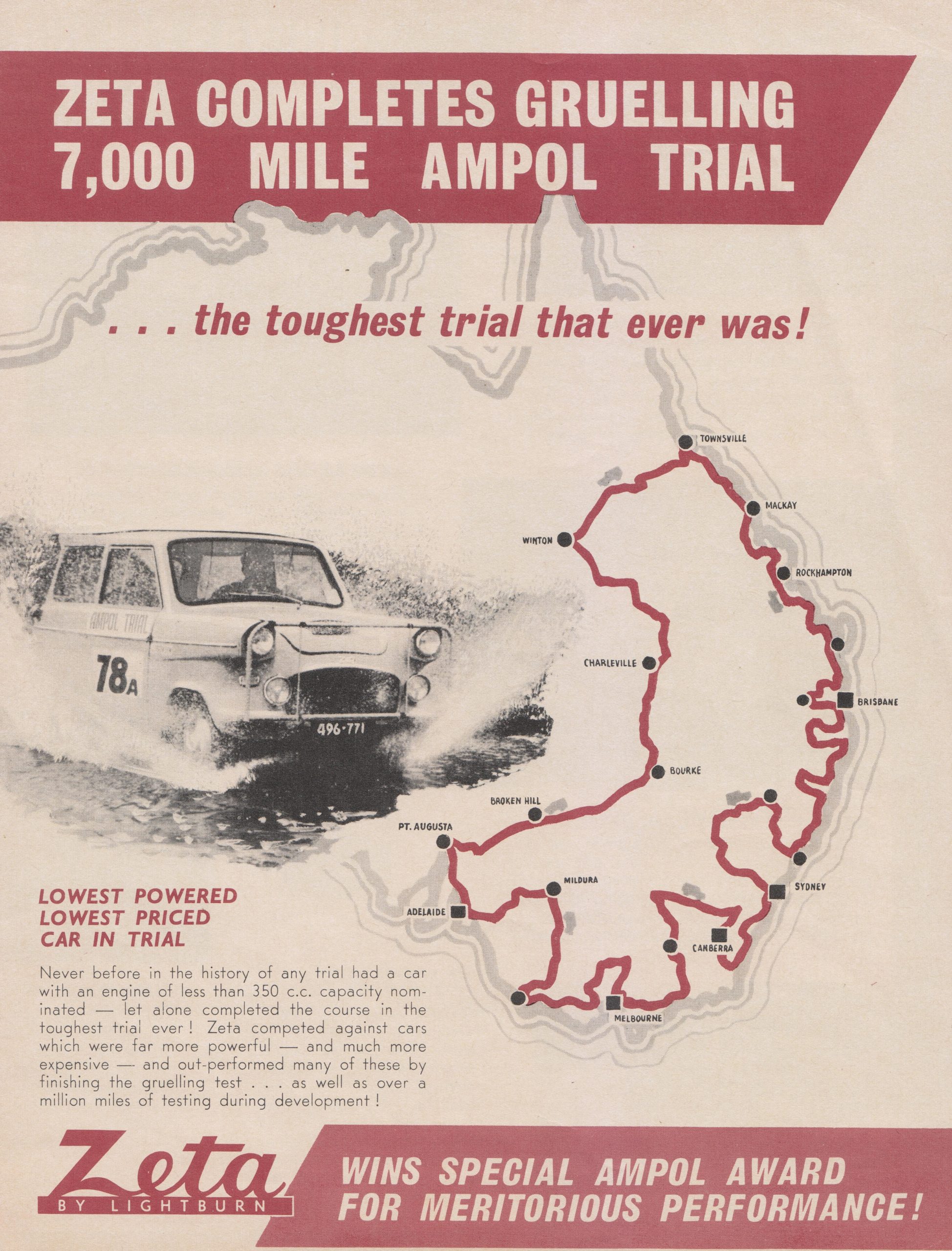 The three Zetas finished the race, but only one completed officially. Zeta 78A courageously placed 101. Proudly, it was the final car to finish back at Bondi Beach, subject to official race rules of timed legs, checkpoint penalties, disqualifications, breakdowns, and hazards from the 147 cars that started.

The Lightburn Zeta microcar proved its endurance in the 1964 Ampol Round Australia Trial, but sadly this was not enough to convince the Australian car buying public to support this economical homegrown car.

Microcar Models Australia produced in white metal a precision 1:43 scale model of the 1963 Zeta Runabout Rally Car #78A you can buy here.

View cart “Avolette Record De luxe – 1956” has been added to your cart.